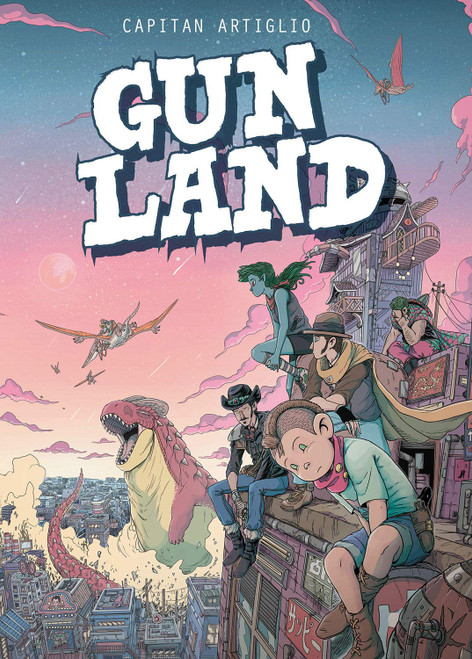 The Doolin brothers (ne Dueling Brothers) are notorious outlaws tracking down a stash of loot hidden from them by a double crossing partner. As infamous as they think they are, however, theyre pretty basic until they realize the powers each of them get from the crusty old skulls left to them by their genuinely infamous father. While older brothers Dan and Duke are focused on becoming outlaw legends like their Pa, younger brother Dave just wants to settle down and become a decent father to the kid he rescued from a parallel dimension. Did we mention that this is a sci-fi western full of dinosaurs, robots, and magic? Narrowly surviving a shootout by the corrupt alien deputies, Dan and Dave discover their powers for the first time: Dan seems to be un-killable while Dave can somehow open up portals in space and time. Uncertain how exactly their new skills actually work, theirs is a schoolin on the run. And so is that of the poor little girl Dave rescue-adopted. But that little girl proves to be plenty capable of handling herself, being an expert shot with dual revolvers. Pretty soon, shes as infamous as the Doolin brothers hoped to be themselves, drawing the attention of bounty hunters from around the world, including one who calls himself The Cherub of Golgotha. A bizarre sci-fi western where folks ride dinosaurs instead of horses, this gonzo action adventure flies in the spirit of Brandon Grahams KING CITY and MULTIPLE WARHEADS mixed with Jamie Hewletts TANK GIRL set to a soundtrack by GORILLAZ.