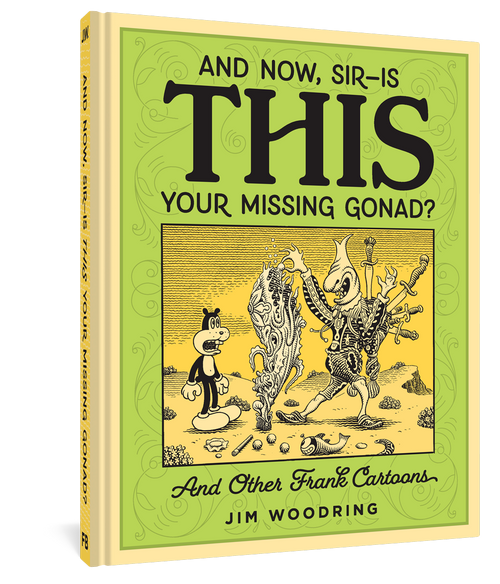 WHILE STOCKS LAST - This edition comes with a signed and numbered bookplate, limited to 200 copies, featuring an all-new image by Jim Woodring! Big thanks to Jim and the Fantagraphic folks for helping make this happen.

A unique detour into the deepest corners of the Unifactor.

And Now, Sir — Is This Your Missing Gonad? brings to your fun-hungry hands over 113 choice and previously unpublished images created by cartooning visionary Jim Woodring between 2009 and 2019 for his private amusement. Featuring Woodring's familiar cast of characters from such canonical graphic novels as Congress of the Animals and Poochytown, but with a twist!

Woodring has enlisted the mysterious Walter Foxglove, The Smartest Artist™, to undertake the huge task of restoring to these images the notes, comments, and coarse jokes that accompanied their creation. The result is a triumph of scattershot revelation. As through the holes and cracks in a shotgun shack, the light of truth seeps in. And in, and in... and in! Don't fail to install this demure volume in your reliquary — its absence will haunt you to your grave.

And Now, Sir — Is This Your Missing Gonad? reads like a collection of otherworldly gag cartoons sent from an extracorporeal corner of nihilist ecstasy. We promise you that you have never viewed situations quite like these.

"Woodring will take you to another world, re-arrange your consciousness and reprogram the inside of your head. It's cheaper than virtual reality, less risky than recreational pharmaceuticals, and more fun than falling asleep." — Neil Gaiman