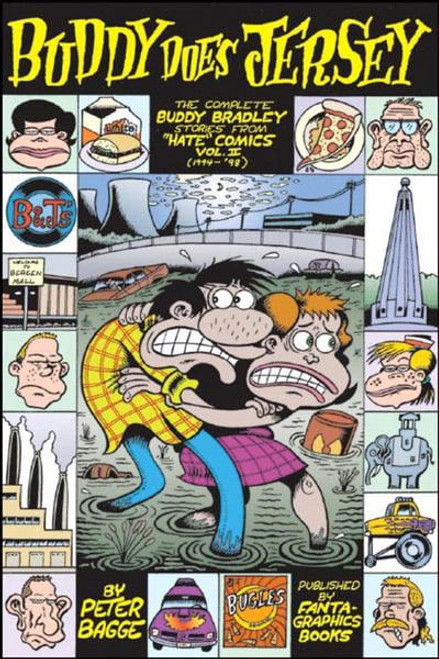 Buddy Does Jersey collects all 15 issues of Hate describing the arc of Buddy's East Coast experience, including his launch as a small businessman (co-owning and running a nostalgia store with the dubious Jay) and his reintegration with his family (his sister now a harassed mom, his brother still pretty much a psycho, and his parents--well, wait and see). Also included in this volume is the shocking final fate of the exuberant Stinky--a story that caused jaws to drop in unison all around the world when it was originally released--and the riotous tale of Lisa's brief conversion to lesbianism and subsequent breakup with Buddy. Originally released in color, the stories in Buddy Does Jersey will here be presented de-colorized in the pristine black and white of earlier Buddy stories, in order to better show off the crisp beauty of inker Jim Blanchard's linework. (Or as much crisp beauty as you need to delineate a row of partygoers setting fire to their own flatulence!) Buddy Does Jersey will feature a long introduction by Bagge describing (for the first time) how the stories in this book reflected events in his own life, and a foreword by the inheritor of Bagge's mantle of hilarious grossness, Angry Youth Comix' Johnny Ryan.