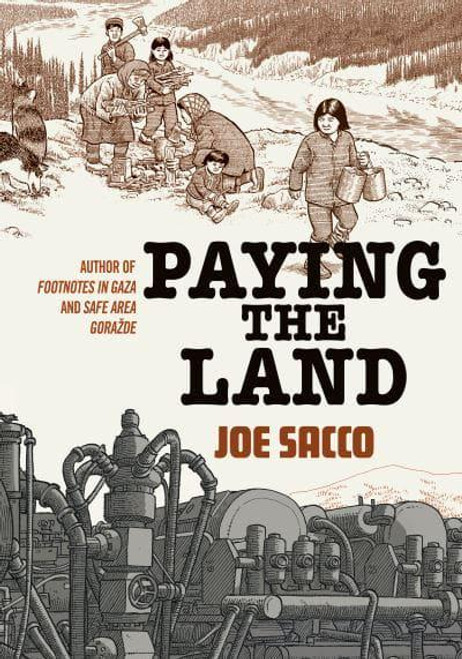 In his first full-length work of journalism in a decade, the ÃÂ¢ÃÂÃÂheir to R. Crumb and Art SpiegelmanÃÂ¢ÃÂÃÂ (Economist) brings his comics mastery to a story of indigenous North America, resource extraction, and our debt to the natural world

The Dene have lived in the vast Mackenzie River Valley since time immemorial, by their account. To the Dene, the land owns them, not the other way aroundÃÂ¢ÃÂÃÂit is central to their livelihood and their very way of being. But the subarctic Canadian Northwest Territories are also home to valuable natural resources, including oil, gas and diamonds. With mining came jobs and investmentÃÂ¢ÃÂÃÂbut also road-building, pipelines and toxic waste, which scarred the landscape; and alcohol, drugs, and debt, which deformed a way of life.

InÃÂÃÂ Paying the Land, Joe Sacco travels the frozen North to reveal a people in conflict over the costs and benefits of development. Resource extraction is only part of CanadaÃÂ¢ÃÂÃÂs colonial legacy: Sacco recounts the shattering impact of a residential school system that aimed to remove the Indian from the child; the destructive process that drove the Dene from the bush into settlements and turned them into wage labourers; the government land claims stacked against the Dene Nation; and their uphill efforts to revive a wounded culture.

Against a vast and gorgeous landscape that dwarfs all human scale,ÃÂÃÂ Paying the LandÃÂÃÂ lends an ear to trappers and chiefs, activists and priests, telling a sweeping story about money and dependency, loss and culture, with stunning visual detail by one of the greatest comics reporters alive.