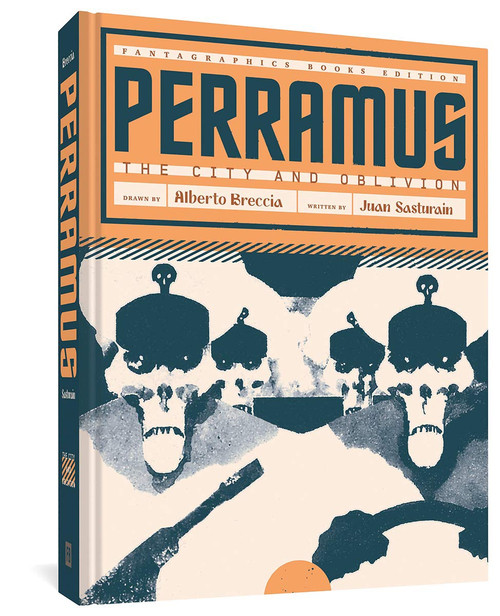 Fantagraphics collects Perramus for the first time in English. Created by one of South American's most acclaimed comics artists, Alberto Breccia, in collaboration with award-winning writer and TV-host, Juan Sasturain, this graphic novel is in the satirical vein of Gulliver's Travels and Dr. Strangelove. Perramus follows the existential odyssey of a political dissident. When the skull-faced Death Squad comes for him, he flees, voluntarily loses his memory, and takes up the name Perramus from the brand of his raincoat. During his absurdist travels, he teams up with the gruff Cannelloni, a foreign aviator dubbed 'The Enemy' by espot MR. WHitesnow; and the blind author Borges (based on the real-life literary figure), who comes to be a guide. This motley crew journeys to outlandish locales where they encounter a variety of eccentric characters - including a director of trailers for films that will never exist; a guerilla force of circus folk, clowns, and puppeteers; a tin-pot dictator with a vast fortune built on an empire of excrement; and Ronald Reagan. Fantacraphics's the Alberto Breccia Library archival series showcases the work of the master. This highly anticipated collection is an act of resistance in and of itself - it was created while argentina's military dictatorship was still in power. Perramus is a cartooning tour de force, with a revolutionary message that remains vital to this day.

TIMES I KNEW I WAS GAY SC SIGNED BY ELLIE CREWES